That would be his son, Chris, the new South African Young International Freight Forwarder of the Year

There are some striking similarities between Chris Garrow and his father, Craig.  They have the same handshake – firm; the same down-to-earth appearance; the same reserved manner as we face off for a brief lunchtime interview at Panama Jacks at Cape Town harbour. They order the same drink – Coke Zero – and regard me with the same air of professional appraisal as I make my first tentative efforts to understand the world of cargo and freight clearing and forwarding.

It seems they are mentally unpacking me, an unknown quantity, into the appropriate container, destination as yet unknown.

The Garrows are to freight what boerewors is to braaivleis, which is to say they are right in there on top of it. Boats mainly – they are agents Cape Town’s premier boat builders – but there is nothing much they can’t move if they put their minds to it, judging by their track record at every major port; the more unusual the cargo, the greater the challenge.

Now the Garrows have the title to prove their freight prowess: Chris was recently crowned the South African young international freight forwarder of the year at the most recent International Federation of Freight Forwarders Associations (FIATA) summit. To crown it all he won a FIATA freight simulation competition, proving his mettle against the best in the industry: “It was sort of like a board game,” recalls Chris of his achievement, “you need to get a cargo to a certain point and you need to figure out how to get your stuff there quickest.”

That pretty much sums up the business plan of Pronto Clearing, the company Craig founded many moons ago when local boatbuilding was in its infancy. “As boatbuilding grew, so we grew with it,” says Craig, a straight-talker whose sentences are packed tight as cargo – a minimum of excess meaning. “At the time I realised the boatbuilding industry would grow – I saw the whole thing happening,” he says.

By the time Chris finished his BCom degree there was plenty for him to do within the family business, which now also employs Chris’s sister and step-sister. He joined in 2013 after a gap year spent perusing the beaches of Clifton and Bournemouth, as a lifesaver. “I wasn’t entirely sure of what I wanted to do, but I have been involved with boats ever since I was a little child – always hanging around and getting used to the business.” As a teenager he skippered the company’s small service boat in the harbour.

Consequently Chris already had a good understanding of the family business by the time he joined: “I started in a general capacity, and helped out with finance and driving around,” he recalls.

From there he gradually learned the intricacies of the business, and acquired a working knowledge of the port environment, both at home and abroad. Following his freight has taken him to ports far and wide, including several exotic locations.

Chris says what makes his work even more interesting is that no cargo is ever exactly the same, particularly on the boating side which often requires unique cargo solutions, such as when faced with a top-end 50m yacht mast: “People contact us with relevant information and we put together a quote,” he explains. “Depending on where it is going, and what time, there may be different routes. You need to know what is going on.” 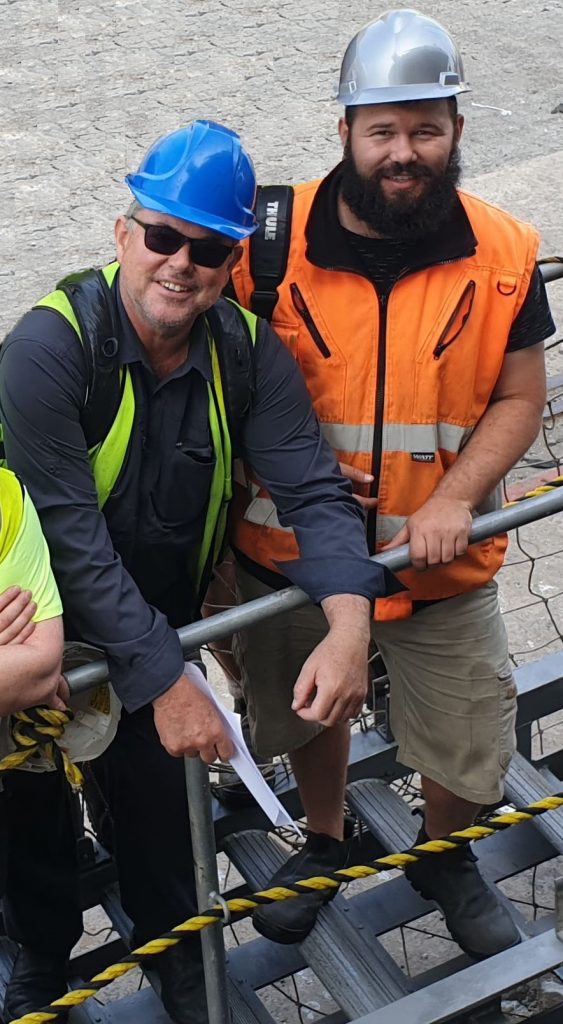 “It’s not really that different to any cargo in that we work with the port staff, the stevedores, the crane operators. We signal them and tell them what to do. The whole loading operating is our responsibility.”

“No boat is the same, each one is different — different requirements depending on how wide it is, what the weight it is etc etc.”

In other words the job entails taking custody of somebody’s dream boat and getting it to them with a minimum of fuss – which partly explains the need to remain calm in the face of adversity. One expects the Garrows have learnt to mask whatever anxiety comes with moving somebody else’s R50-million investment across a wobbly ocean.

“Mostly the owners just let us do out thing — they know we can do it,” says Chris. “They just want their boat to arrive in the same condition it left here. They are all loaded according to certain standards.”

“It is satisfying when you’ve finished the job and the ship is sailing into the distance, because these jobs sometimes take a few days. You are working around the clock – the ships don’t wait for you. Your hands are black for a week afterwards.”

With such a high pressure job one might expect Garrow Jnr to enjoy his leisure time in a hammock, doing very little; you would be wrong. Chris has commenced training for a 4600km open ocean row from the Canary Islands to Antigua – the famous Talisker Whisky Atlantic Challenge. He plans to sign up for the 2021 race edition.

“I have shipped some people’s boats to that race,” says Chris, who is used to adventuring vicariously through the equipment of his clients, be they boats or motorcycles.

But in this case the cargo experience is not quite enough – he wants to freight himself across the sea.

“I’m getting there,” he smiles.