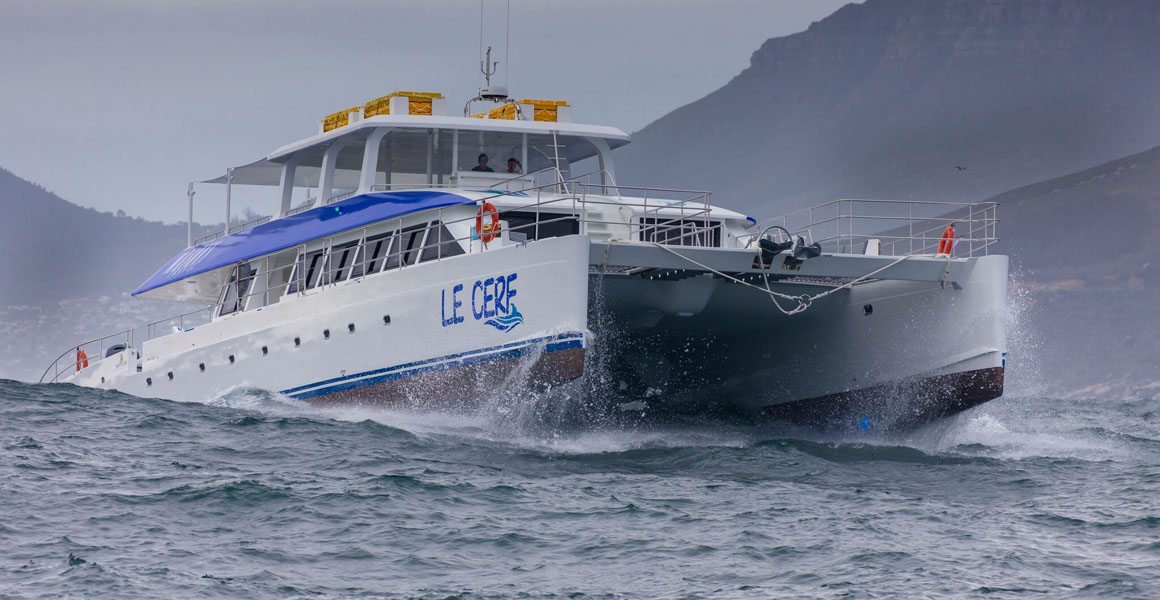 June was baby boom month for Cape Town boatbuilders, with impressive new hulls launched and others nearing their due date.

However there is nothing infantile about the newcomers, which include South Africa’s biggest ever composite catamaran, produced by Two Oceans Marine Manufacturing.  The impressive 110ft day charter catamaran Le Cerf can carry 275 people and will be an eye-catching addition to the seascape around Mahé in the Seychelles.

Le Cerf design features include a bar and a dance floor – always a good combination – on the lower deck, together with dining seating for 90 guests. The upper deck also has dining and casual seating galore. A flybridge, 6m tender on a fixed davit, and blue effects LED lighting complete the top-notch package that is another feather in the headgear of Mark Delany and Anton du Toit. “She is the 11th large custom catamaran that the partnership (Two Oceans / Du Toit) has launched, with an 82-foot carbon performance sailing catamaran and an 85-foot power catamaran due to be launched later in the year,” Two Oceans said in a press release in June.

Also in June came the much-anticipated Scape Sport 40, boasting a fresh new open-deck formulation that builder Kevin Knight described as a “Simonis-Voogd  platform with some flare from Anton du Toit.. and input from owners and builders.” The epoxy cat weighs in at just under five tons and has already generated several enquiries. Knight believes the vessel speaks to an adventurous class of boat owners who seek added performance on their cruising holiday. “This is a sailor’s boat, let us not get away from that,” said Knight. “It’s a sailor’s boat giving you creature comforts. There is a lot of interest.”

Also in the water – but still under wraps for now – is a new 62ft Simonis-Voogd carbon design, due to make a splash at the Annapolis Show in October.

July looks set to continue the fertile boat building season with several other boats nearing completion, among them the new Havana 44 Powercat from Cruiser Cats — now “95% complete according to a recent Facebook post”.  Not far behind is the new Voyage 590, out of the moulds in March and available for demo in early 2020.

If winter is this productive then just imagine what summer might bring.